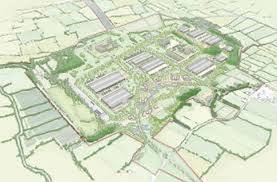 The old Royal Ordnance Factory at Puriton was opened during the re-armament period before the Second World War and at its peak employed 1,000 people. The 635 acre site closed in 2008, but Sedgemoor District Council has since resolved to grant planning permission for the site to be redeveloped as an energy park to supply green energy. The adopted Sedgemoor Core Strategy allocated this major site for redevelopment and regeneration. It is the only major employment site that has been allocated to the year 2027

A planning application for the Huntspill Energy Park, consisting of full and outline matters, was submitted by BAE Systems (Property Investments) LTD to Sedgemoor District Council on 15 April 2013 (planning ref: 42/13/00010). The application was considered by the Sedgemoor Planning Committee on 12 November 2013 during which members resolved to grant planning permission subject to the signing of a Section 106 agreement. A S.106 agreement is the mechanism which make a development proposal acceptable in planning terms, that would not otherwise be acceptable. The energy park S.106 agreement consists of the following draft heads of terms:

1.  Requirement for the development to be occupied by uses that relate to renewable and low carbon energy generation and related and complementary uses as set out in the Council adopted Puriton Energy Park Supplementary Planning Document (SPD)

2.  Delivery of the strategic transport improvement scheme at Junction 23 of the M5

3.  Travel Plan to deliver sustainable modes of travel to the site – including footpath / cycleway / bus infrastructure / and other ‘smarter choice options’ as identified

6.  measures on the A39 to include a new roundabout (Puriton Hill Junction) and alterations to the junctions of Hall Road and Hillside.

7.  A new access road with alterations to the Woolavington Road

8.  Provision of ‘Green Bridge’ (A 8m bridge – 3m pathway, cycleway and bridleway, with 2 x Landscape Strips and a safety fence at either side).

12.  Securing investment into the wider local transport network and the delivery of a transport strategy for Sedgemoor and the Council’s Infrastructure Delivery Plan.

15.  Economic Development including improving capacity to assist in the delivery of energy generation and related uses on the site and the development of a framework for securing Local Labour Agreements for both construction and operation phases

In June 2013 BAE Systems was granted detailed planning consent for the construction of a new access road to serve the site, connecting the southern boundary of the site to the A39. Funding and construction of the road and associated works, including a footbridge over the new road, form a planning obligation linked to the Energy Park consent.

In November 2015 the Government designated the ROF site an Enterprise Zone. This status is awarded by a statutory order and it is for the industrial use of the site.

In July 2016 the following report was presented to the SDC Executive Committee: Huntspill Report, Annex.  The report gives a timescale that shows the works to the site and surrounding roads are expected to begin in 2017.

Sedgemoor DC have agreed that another consultation session with the parish will be held in the near future to update it on plans and progress. Puriton Parish Council, during the consultation period in 2013, rasied concerns about the proposed development. It continues to request that it is kept updated about developments at the ROF site and will update this page when further information is made available.